A novel research axis in my laboratory is to investigate Quantum Phase Transition in a fluid of light. We have all already observed in everyday life water that freezes or boils and ice that melts. A modification in the fundamental properties of a physical system that crosses the boundary between two phases is known as a phase transition. This macroscopic change is driven by fluctuations at the microscopic scale. For a system at a temperature close to absolute zero, all thermal fluctuations vanish and the system loses any opportunity to change. Phase transitions are therefore prohibited in classical systems at zero temperature. In the quantum world, physics is very different since fluctuations are present even at zero temperature, due to Heisenberg’s uncertainty relation. In certain situations, these microscopic quantum fluctuations may be strong enough to drive a macroscopic transition from one phase to another, known as a quantum phase transition1.

One striking consequence of quantum phase transitions is the existence of metals, predicted to be conductors by the conventional band theory, that are actually insulators at low temperature. The explanation, proposed by Mott is the presence of a quantum phase transition due the interplay between the Coulomb repulsive interaction of electrons and their degree of localization in the crystalline lattice. These states, known as Mott insulators, are thought to have a deep connection with high-temperature superconductivity and therefore are subject to intense research not only in condensed matter but also in ultracold atomic physics.

‘Our goal is to observe the superfluid to Mott insulator transition in a fluid of light.’

Achieving this prime experimental challenge is due to bring a major revolution to the fields of analogue quantum simulation and linear optics quantum computing.
On the fundamental side, it could push photon fluids to a new regime of many-body physics, opening the way to create and study strongly correlated systems with light.
On the applied side, we use the Mott insulator state of light as a giant source of single photons (or any Fock states) with potentially several hundreds of lattice sites delivering tunable photon number states in parallel and at a high rate, with the potential for a massive implementation of linear optics quantum computing. 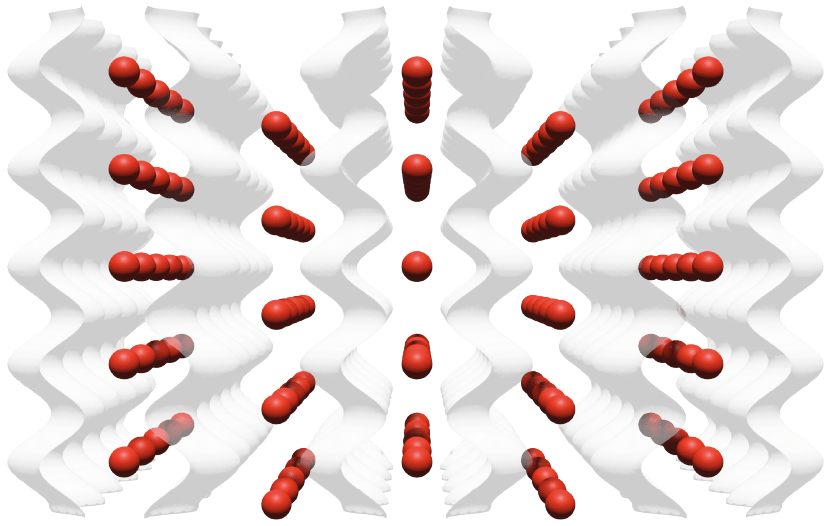 Observation of the Bogoliubov Dispersion in a Fluid of Light
Fontaine, Q. and Bienaimé, T. and Pigeon, S. and Giacobino, E. and Bramati, A. and Glorieux, Q.

Observation of the Bogoliubov Dispersion in a Fluid of Light

Quantum fluids of light are a photonic counterpart to atomic Bose gases and are attracting increasing interest for probing many-body physics quantum phenomena such as superfluidity. Two different configurations are commonly used: the confined geometry where a nonlinear material is fixed inside an optical cavity and the propagating geometry where the propagation direction plays the role of an effective time for the system. The observation of the dispersion relation for elementary excitations in a photon fluid has proved to be a difficult task in both configurations with few experimental realizations. Here, we propose and implement a general method for measuring the excitations spectrum in a fluid of light, based on a group velocity measurement. We observe a Bogoliubov-like dispersion with a speed of sound scaling as the square root of the fluid density. This Letter demonstrates that a nonlinear system based on an atomic vapor pumped near resonance is a versatile and highly tunable platform to study quantum fluids of light.

Interferences between Bogoliubov excitations in superfluids of light
Fontaine, Quentin and Larré, Pierre-Élie and Lerario, Giovanni and Bienaimé, Tom and Pigeon, Simon and Faccio, Daniele and Carusotto, Iacopo and Giacobino, Élisabeth and Bramati, Alberto and Glorieux, Quentin

Interferences between Bogoliubov excitations in superfluids of light

Paraxial fluids of light represent an alternative platform to atomic Bose-Einstein condensates and superfluid liquids for the study of the quantum behavior of collective excitations. A key step in this direction is the precise characterization of the Bogoliubov dispersion relation, as recently shown in two experiments. However, the predicted interferences between the phonon excitations that would be a clear signature of the collective superfluid behavior have not been observed to date. Here, by analytically, numerically, and experimentally exploring the phonon phase velocity, we observe the presence of interferences between counterpropagating Bogoliubov excitations and demonstrate their critical impact on the measurement of the dispersion relation. These results are evidence of a key signature of light superfluidity and provide a characterization tool for quantum simulations with photons.