We study out-of-equilibrium phenomena in a paraxial fluid of light.
Since we can shape the fluid density and velocity with a high degree of control and detect the full wave-function of our state (density and phase) we have access to novel experiments with unprecedented control.

Imagine a quantum system prepared at t=0 in a pure state which is the ground state of some Hamiltonian (or, more generally, in a thermal state at a temperature less than the gap to the first excited state). For times t>0, the system evolves according to the dynamics given by a different Hamiltonian after varying a parameter such as the interactions.
This variation is called a quench, when it is carried over a short time scale compared to the energy of the first excited state.
An important question is: how do the local observables and the correlation then evolve?

A vast topic that fluids of light can help investigate is analogue gravity, i.e. how to mimic gravitational effects in a non-linear optics experiment. The underlying idea behind hydrodynamical model for gravity has been introduced by W. Unruh. In 1981, he showed that sound waves in an accelerated flowing medium mimic the space-time geometry of a black hole with a well defined event horizon.
In our lab we study the spontaneous creation of analogue cosmological particles due to the rapid expansion of the Universe after the Big-Bang in a quenched superfluid of light.

The emerging area of atomtronics proposes to characterize the quantum gases systems by letting atomic currents flow onto them. In this context, we study the dynamics following the imprinting of a current on a 1D fluid of light ring interrupted by a small barrier. Moreover, we study the effect of a local over-density in an homogenous fluid of light and report the formation of dispersive shockwaves.

Two-stream instability is a widely studied phenomenon, especially in the domain of plasma physics.
This is also an exciting problem to explore with a fluid of light when two counter-flowing fluids interact via the optical nonlinearity.
Under specific conditions, an instability can be triggered in 2D photon fluid mixture, rooted in the resonant energy transfer from the drift velocity to the elementary Bogoliubov excitations of the photon gas.
This unstable regime can be explored experimentally in our platform.

In the direct line of turbulence measurement, we propose to study two-stream instability by changing the ratio between the flow velocity and the speed of sound of the collective Bogoliubov excitations.This has been predicted that certain class of instabilities may also provide a route towards the generation of topological structures such as vortices and solitons in quantum gases. This play an important role in the investigation of out-of-equilibrium phenomena in the superfluid regime and, in particular, in the excitation of quantum turbulence. 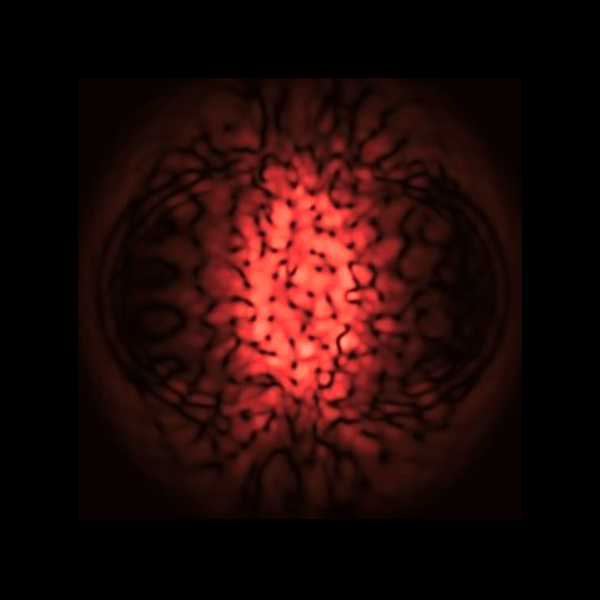