“Superfluidity is one of the most striking manifestation of quantum many-body physics. Initially observed in liquid Helium, the realization of atomic Bose-Einstein condensates (BEC) has allowed detailed investigations of this macroscopic quantum phenomenon exploiting the precise control over the system parameters. In my group, we study superfluidity of light in hot atomic vapor with special interest on low dimensionality and beyond mean field effects.”

Quantum fluids of light are photonic counterpart to atomic Bose gases and are attracting increasinging interest for probing many-body physics quantum phenomena such as superfluidity. Two different configurations are commonly used: the confined geometry where a nonlinear material is fixed inside an optical cavity (proposed 30 years ago by Pomeau and Rica), and the propagating geometry where the propagation direction plays the role of an effective time for the system 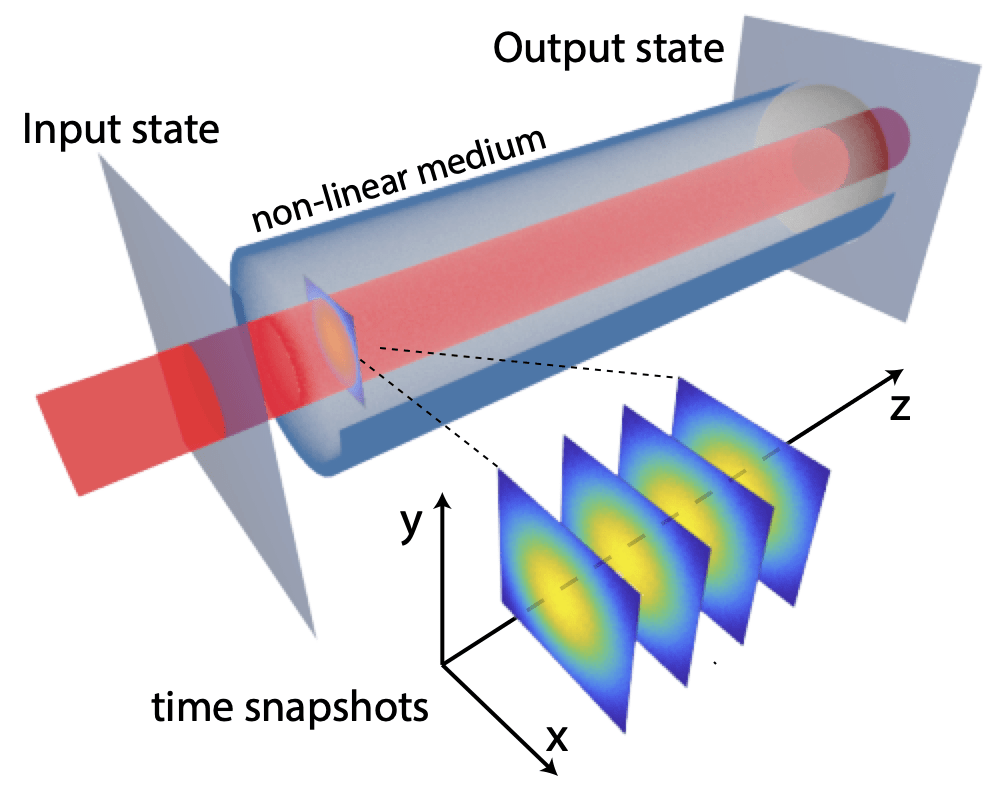 Recently, my experimental research group focused on the propagating geometry inspired by pioneering works in photorefractive crystals and thermo-optic liquids. We developed a novel platform for fluids of light based on the spatial evolution of a continuous laser beam propagating in a hot atomic vapor under the paraxial approximation. Interestingly, this geometry allows for a mathematical mapping to the 2D Gross-Pitaevskii equation, where the local light intensity corresponds to the photon density and the spatial gradient of its phase to the velocity. The key point is that this system simulates the dynamics of a 2D quantum fluid where each transverse plan (x,y) at a given z is a time snapshot of the effective temporal evolution. In 2018, my group demonstrated the relevance of this approach, known as paraxial fluid of light, with the observation of a superfluid state of light.

Superfluidity is the ability of a fluid to move without any friction. Landau proposed several experiments to demonstrate superfluidity including a rotating bucket (if a bucket of superfluid is rotated it would be expected that the fluid would remain stationary due to the fluid lack of friction with the bucket) or the fountain effect. There are several behaviours that can be said to be the hallmarks of superfluidity simply because they do not occur anywhere else in nature.

For fluid fluids of light, the standard way to probe superfluidity is by observing the absence of scattering when a fluid of light hits a potential defect, as recently demonstrated in my group
We are now focusing on a new way of testing light superfluidity. The goal of this experiment is to replace a fixed potential barrier by a movable defect and observe the optical feedback of the fluid on the defect itself. To take an hydrodynamic example, I will replace a fixed bridge pile in a superfluid river by a mobile branch of a tree and observe the movement of the branch. Our goal is to observe the first mechanical signature of superfluid behavior of light. 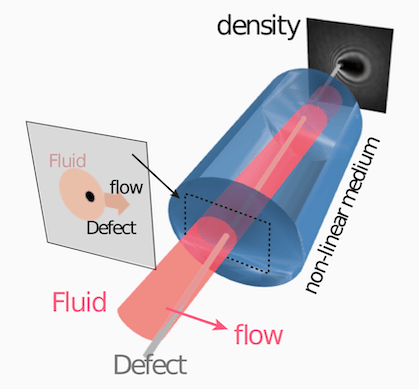 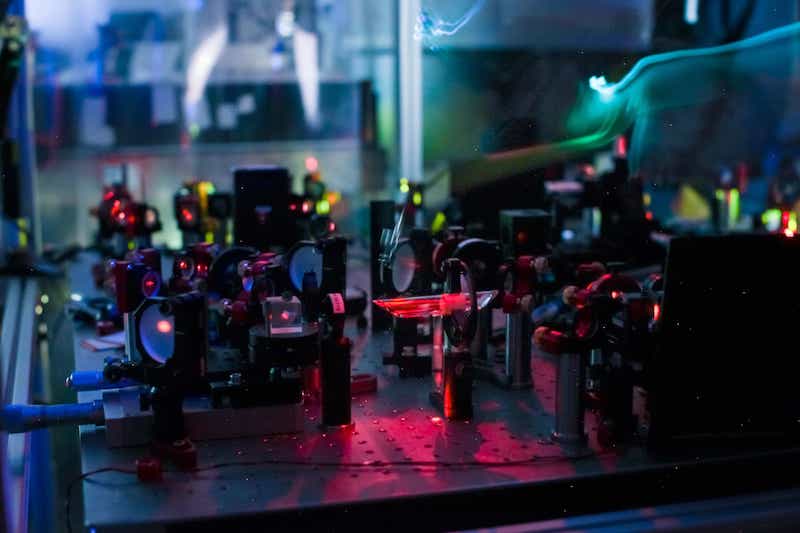 Observation of the Bogoliubov Dispersion in a Fluid of Light
Fontaine, Q. and Bienaimé, T. and Pigeon, S. and Giacobino, E. and Bramati, A. and Glorieux, Q.

Observation of the Bogoliubov Dispersion in a Fluid of Light

Quantum fluids of light are a photonic counterpart to atomic Bose gases and are attracting increasing interest for probing many-body physics quantum phenomena such as superfluidity. Two different configurations are commonly used: the confined geometry where a nonlinear material is fixed inside an optical cavity and the propagating geometry where the propagation direction plays the role of an effective time for the system. The observation of the dispersion relation for elementary excitations in a photon fluid has proved to be a difficult task in both configurations with few experimental realizations. Here, we propose and implement a general method for measuring the excitations spectrum in a fluid of light, based on a group velocity measurement. We observe a Bogoliubov-like dispersion with a speed of sound scaling as the square root of the fluid density. This Letter demonstrates that a nonlinear system based on an atomic vapor pumped near resonance is a versatile and highly tunable platform to study quantum fluids of light.

Measurement of the Static Structure Factor in a Paraxial Fluid of Light Using Bragg-like Spectroscopy
Piekarski, Clara and Liu, Wei and Steinhauer, Jeff and Giacobino, Elisabeth and Bramati, Alberto and Glorieux, Quentin

We implement Bragg-like spectroscopy in a paraxial fluid of light by imprinting analogues of short Bragg pulses on the photon fluid using wavefront shaping with a spatial light modulator. We report a measurement of the static structure factor, S(k), and we find a quantitative agreement with the prediction of the Feynman relation revealing indirectly the presence of pair-correlated particles in the fluid. Finally, we improve the resolution over previous methods and obtain the dispersion relation including a linear phononic regime for weakly interacting photons and low sound velocity.

In inflationary cosmology, the rapid expansion of the early universe resulted in the spontaneous production of cosmological particles from vacuum fluctuations, observable today in the cosmic microwave background anisotropies. The analogue of cosmological particle creation in a quantum fluid could provide insight, but an observation has not yet been achieved. Here we report the spontaneous creation of analogue cosmological particles in the laboratory, using a quenched 3-dimensional quantum fluid of light. We observe acoustic peaks in the density power spectrum, in close quantitative agreement with the quantum-field theoretical prediction. We find that the long-wavelength particles provide a window to early times, and we apply this principle to the cosmic microwave background. This work introduces a new quantum fluid, as cold as an atomic Bose-Einstein condensate.

Taming the snake instabilities in a polariton superfluid
Ferdinand Claude and Sergei V. Koniakhin and Anne Ma\^itre and Simon Pigeon and Giovanni Lerario and Daniil D. Stupin and Quentin Glorieux and Elisabeth Giacobino and Dmitry Solnyshkov and Guillaume Malpuech and Alberto Bramati

Taming the snake instabilities in a polariton superfluid

The dark solitons observed in a large variety of nonlinear media are unstable against the modulational (snake) instabilities and can break in vortex streets. This behavior has been investigated in nonlinear optical crystals and ultra-cold atomic gases. However, a deep characterization of this phenomenon is still missing. In a resonantly pumped two-dimensional polariton superfluid, we use an all-optical imprinting technique together with the bistability of the polariton system to create dark solitons in confined channels. Due to the snake instabilities, the solitons are unstable and break into arrays of vortex streets whose dynamical evolution is frozen by the pump-induced confining potential, allowing their direct observation in our system. A deep quantitative study shows that the vortex street period is proportional to the quantum fluid healing length, in agreement with the theoretical predictions. Finally, the full control achieved on the soliton patterns is exploited to give proof of principle of an efficient, ultra-fast, analog, all-optical maze solving machine in this photonic platform.

Coherent merging of counterpropagating exciton-polariton superfluids
Boulier, T. and Pigeon, S. and Cancellieri, E. and Robin, P. and Giacobino, E. and Glorieux, Q. and Bramati, A.

We report the formation of a macroscopic coherent state emerging from colliding polariton fluids. Four lasers with random relative phases, arranged in a square, pump resonantly a planar microcavity, creating four coherent polariton fluids propagating toward each other. When the density (interactions) increases, the four fluids synchronize and the topological excitations (vortex or soliton) disappear to form a single quantum superfluid.